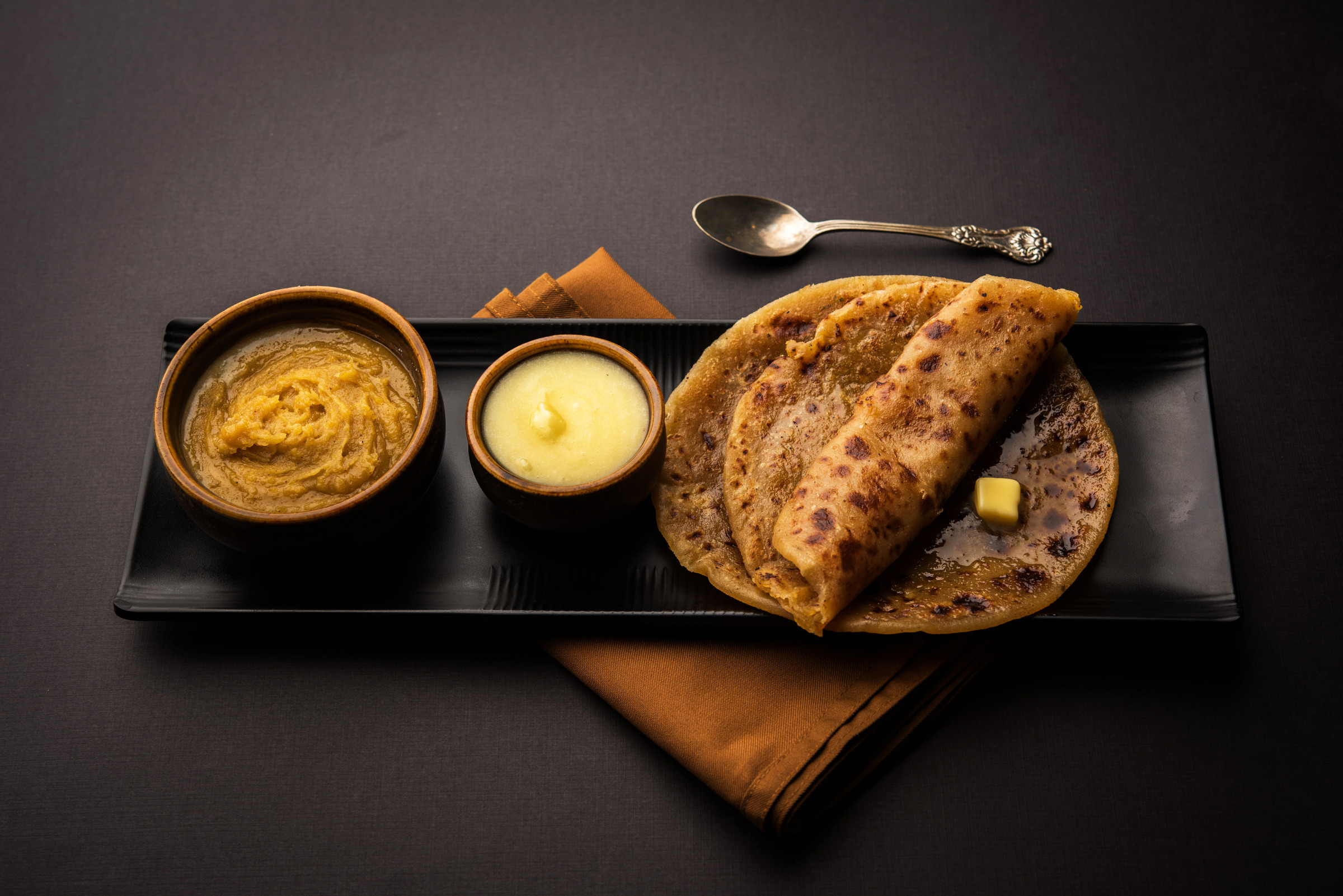 We cook Puran puri dishes during Ganesh Chaturthi and Diwali festivals. Puran puri has a delicious taste, and you can make it using a pan or mud vessel upside down.

Ingredients
Refined Wheat flour – 4 cups
chickpea – 1 cup
Salt – 1 pinch
Oil – 6-7 tbsp
Sugar – 1 cup
Jaggery – 1 cup
Cardamom powder- 1tbsp
We need to make the dough first for Puran Puri.
Take a bowl, add all-purpose flour, oil, salt and make dough from it. Rest it for some time.
For stuffing, soak chickpea flour for some time.
Add chickpea in a pressure cooker and cook for 4-5 whistles. You can also boil in it any utensil.
After cooked, Drain the cooked chickpea.
Add Jaggery and sugar in Cooked chickpea and saute the mixture in a pan until the combination is united.
Now take the dough and make balls from it.
Roll the ball and make a Roti from it.
Now Take chickpea and stuff chickpea inside Roti.
Now roll the stuff chickpea Roti.
Saute the Roti on a pan until it is ready.

Puran puri has a lot of health benefits. It is a rich source of protein and dietary fiber. Vitamin B6 and Magnesium-rich that can fill your daily nutrition need. Diabetic patients can also enjoy Puran puri because it is productive with fructose and less with glucose. The vegetarian prefers to eat a lot of Puran Puri during festive seasons like Ganesh Jayanti and Diwali.

In North Maharashtra, Puran puri serves along with mango juice, as Aamras. It is also a special dish in the state of Karnataka. You can also add a pinch of eating soda if you want to make it crispy. The chickpea flour is famous when we use it in pakoras. We eat along with another Indian delicacy like Basund and Kadhi.

There is a difference in the preparation of this dish from state to state. We can by adding peanut, sugar, coconut Ann sugar-free instead of using the weight floor. We can also use rice flour, which will make this puri very thin.

We can also use ghee instead of oil. If you don’t like round shape, we can make square-shaped puri. You can make this puri By rolling pin, or you can make it as a hand toast. We can cook Puran puri using an oven so that it contained fewer points. We can add other flavors light turmeric, saffron, cardamom.

There are some states where a lot of People add ginger and garlic paste. We can eat Puran puri with the help of chutneys or sauce. We can use tomato sauce or chili sauce to serve this puri. In other countries, a lot of People called it sweet bread or flatbread.

This recipe is in Indian culture since the 14th century. Please note Bengal gram is another term for chickpea flour or Tur Dal. In India, a lot of People make this when they have a guest at home or a cultural event. Pola is another festival where Indians make Puran puri for evening dinner. In the USA we can buy frozen poli.

Food traders in India transport a lot of Indian foods in the frozen state across the world. So not only it is available in the USA, but it is available across the globe please you cannot make it on your own. The reason why Indians it lot of Puran poli because it is the favorite dish of their most respected Goddess, Mahalaxmi. Please note Bengal gram is also called sweet lentil in some areas around the globe.

During the Holi festival, a lot of Indian and British crowd love Puran puri. Around 90% of the families in the state of Gujrat and Rajasthan have Puran poli in their regular diet. We can also use puri in full bulk quantities on a weekday and a date for the rest of the week by keeping it in the refrigerator.

Sometimes Puran puri is she’s also served as a “prasad” Religious offering when a person says his prayers to God. During Hindu traditional marriage, there is also serve as a six during the the day or night meals.

We use cookies to ensure that we give you the best experience on our website. If you continue to use this site we will assume that you are happy with it.Accept